Is There a Link Between Sugary Drinks and Cancer?

A recent study published by the British Medical Journal suggests sugary drinks including fruit juice and fizzy pop may increase the risk of cancer. The French scientists suggested the impact of blood sugar levels may be to blame.

What counts as a sugary drink?

Well, the researchers defined it as any drink with more than 5% sugar. That includes fruit juices (even with no added sugar), energy drinks, tea and coffee with sugar stirred in.

What were the findings?

The study found that drinking an extra 100 ml of sugary drinks a day – about two cans a week, increases the risk of developing cancer by 18%. For every 1,000 people studied, there were 22 cancers.

So is this definitive proof?

No. The study was designed to spot patterns in data but it can not explain them. It did show that those individuals who drank the most sugary drinks had more cases of cancer than those who drank the least. However it does not account for other unhealthy behaviours those individuals could have had. For example, eating high volumes of salt and consuming more calories.

While there is a correlation between high volumes of sugary drinks and cancer, it does not mean causation.

Could this be linked to obesity?

Obesity is a major cause of some cancers – and excessive consumption of sugary drinks would increase the odds of putting on weight. However, the study said it was not the whole story. 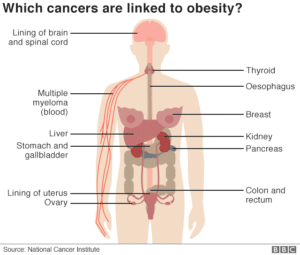 “Obesity and weight gain caused by excessive sugary-drink consumption certainly played a role in the association but they did not explain the whole association” Dr Mathilde Touvier.

The team state that further large scale studies are needed to corroborate the findings.

“Sugary drinks are known to be associated with an increased risk of cardiovascular diseases, overweight, obesity and diabetes. But what we show is they are also associated, maybe, with cancer risk.” Dr Touvier

Being aware of sugar levels and BMI is important not just for the risk of cardiovascular disease and diabetes, but also in reducing the risk of cancer. If you would like to find out your sugar levels, BMI and cholesterol, book in for a free NHS Health Check today.